Fit for Skiing
How to select and fit a ski boot 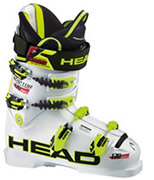 What You Should Be Thinking

Let your bootfitter worry about dialing in the right fit for you (we illuminate this process below).  You should focus on the performance aspects of the boots you try on.  Your bootfitter can assist you in this arena as well, but ultimately you have to determine if the boot is sufficiently supportive.

Flex index:  The single greatest performance differentiator among ski boots is their stiffness, which manufacturers designate with a flex index, often as part of the model name—as in Super Pro 100—meaning the Super Pro has a flex index of 100.  Lower numbers mean a softer flex, higher numbers a stiffer flex.

♀ IMPORTANT NOTE:A lower cuff (which affects flex characteristics) is the defining trait of all women’s boots; ergo, a women’s 90 isn’t usuallygoing to be the same flex as the men’s 90. Respecting this inherent difference, we append a “W” to women’s boots’ flex numbers.

The problem with this system is that it is utterly non-standardized, so it’s only useful when comparing models within a given brand and shell design.  As a cross-brand reference, it’s virtually useless.  One thing you can guess from a flex index is the price: the stiffer the boot, the higher the flex index and the steeper the price.

For more on this, see Buying Boots–Two Numbers to Know.

Range of travel:  A stiffer boot limits the leg’s range of travel; a softer boot allows the lower leg to travel further forward.  The range of travel should in a Goldilocks zone where it’s not so stiff it can’t help absorb shock, nor so soft the boot cuff bottoms out against the lower shell, effectively numbing all communication with the ski.

Hinging behavior:  Not all boots flex alike.  Three-piece shells with a rigid, external tongue don’t behave like traditional overlap constructions.  Where and how the boot upper hinges to allow for forward travel while inhibiting rearward movement is a critical technical feature that significantly influences a boot’s overall performance

Hike position:  This convenience feature is seeing a resurgence, driven by heightened interest in sidecountry skiing, aka, exploring lift-assisted, hike-to terrain.  Some performance properties are invariably compromised whenever a hike feature is present, so be sure to honestly self-assess how often you’ll deploy this feature.

Flex adjustability:  The simplest, most effective flex adjustment is a commonplace feature on many high-end, 4-buckle, overlap shells: two screw rivets on the rear spine control the rigidity of the coupling between lower shell and cuff. Remove a rivet and the flex drops a noticeable notch.

Shell mold-ability:  Two new technologies, a vacuum-molding technique from Fischer and a heat-molding method from Salomon, allow the shell to be custom fit to the skier.  Custom fit liners can only fill voids in the shell; a custom shell eliminates the voids.  In the right hands, either new shell-molding technology can be made to perform near miracles.

Buckle range:  All boot fits evolve over time, so it’s important to examine how much adjustability is built into the buckle system.

Closure effectiveness:  Some buckles appear to be doing more than they’re actually capable of.   In some designs, certain buckles play no useful role in holding the foot.

Stance adjustability:  The boot sole can be treated as a multi-axis platform that has a direct effect on the skier’s stance and therefore how they pressure a ski. The most effective stance correction for bow-legged or knock-kneed skiers is altering the angle of the foundation on which they stand. Interchangeable soles are one way to do this; planning the sole – an artisanal craft best left to experts – is another.

Materials:  One of the biggest cost drivers in a ski boot is the material from which it’s made.  The proliferation of boots with a “hike” position has given boot makers a rationale for deploying, lighter, cheaper plastics that don’t have the same properties as the polyurethane and polyether boots made for technical skiing.

What Your Bootfitter Should be Thinking

One way for us to demonstrate how we proceed through a boot sale is to treat you, Dear Reader, as our customer.  As the scene opens, introductions are behind us and you are seated with your bare feet where we can inspect them.

As we chat you up about your most recent ski experiences and why your current boots are on the endangered species list, our fingers are feeling your feet for any special protrusions.  We take in how you sit, how you stand and how you flex forward when asked to do so.  Here’s what we’re looking for, along with a brief explanation of why. 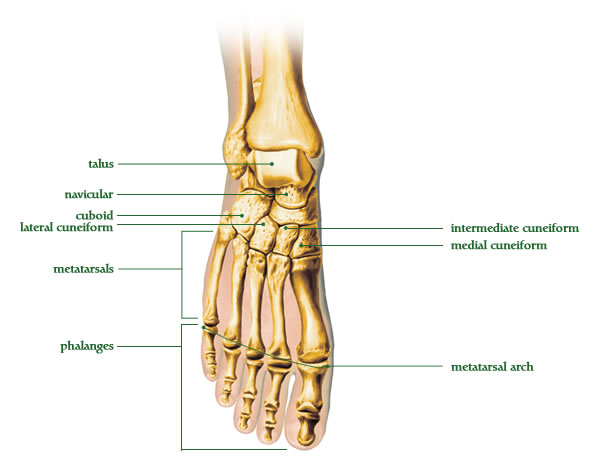 Forefoot width and metatarsal arch angle:  The primordial indicator of boot fit is the forefoot width at the shell’s widest point, given in millimeters.  A 97mm is considered a narrow, race last, a 100mm is medium and anything 102mm or wider is considered wide.  As goes the forefoot, so goes the rest of the shell dimensions:  narrower boots are smaller everywhere, not just up front.  What the measurement doesn’t tell you is the angle of the metatarsal arch, or where the foot is widest.

Mid-foot volume:  A ski boot has to be able to hold the foot down and back in the shell.  The fit around the ankle and mid-foot is critical to this mission.  It has to be precise but not throttling. The heel-instep perimeter dimension is a key factor in selecting the proper shell.

Protruding navicular: Just below and forward of the medial ankle, this little devil sticks out on every pronated American, which includes most of us.  It’s a telltale sign that some form of underfoot support is advisable.

Protruding cuneiform and/or cuboid: This is the special plague of womankind, exacerbated by fashion footwear that so elevates the heel the mid-foot gets mashed together.  These bones aren’t going to magically roll back into place like the navicular; they need room, a cushioned dome over their heads.

Prominent styloid process: No layman would ever know this bony end of the 5th metatarsal exists except when they try to fit a ski boot.  The styloid lives where many boots narrow down behind the forefoot.  This may require a little surgery, on the boot or the skier.

The all-powerful longitudinal arch:  Whether you have a high, locked arch, a flat, flaccid one or the rare, flexible but not flat, neutral, slightly bridged, perfect arch, how your arch fits will drive your impression of how the boot fits.  It makes no sense to fit a flat foot until it’s given a little extra love in the form of a superior insole.  The high arch can’t be lowered; it can only be worked around.  The neutral arch doesn’t need any extra help to perform, but any foot likes properly made custom support.

Calf volume: This area is easy to identify as a problematic zone when the boot aperture is too narrow for someone (usually pinching a women’s calf), but is often overlooked as a problem for the low-volume leg that’s allowed to rattle around the top of the boot, never finding a permanent home.  At the end of the day, how the calf is captured ends up as important as fitting any other part of the foot or lower leg.

Abducted stance:  Most people who plop down in front of us, ready to be analyzed for their next boot, immediately and naturally point their toes away from the midline of the body.  In other words, their natural stance is abducted, or more colloquially, duck-footed.  (This is the way their skis also point when they sit on the chairlift, but we digress.)  Point being, some boots are built around an abducted stance.

Mid-foot flexibility/rigidity: We don’t inspect everyone for this condition, but it’s easy enough to check for.  If the mid-foot is rigid, it suggests the skier will have a more limited range of forward flexibility.  No reason to call out the National Guard, but it does mean the skier should be held more accurately in the right stance.

Athletic movement: This is one of the most important assessments we bootfitters make.  It addresses a pivotal concern:  are we dealing with an athlete, someone with total kinesthetic awareness?   We get our first indication when we ask the skier to flex the boot they’ve just put on.  Some people can perform this motion as easily as breathing; for others, it requires some coaching.  If we’re dealing with an athlete in their prime, this doesn’t just change one or two factors – it changes everything.

Oh, and before we’re done with our pre-boot selection inspection, we’ll also measure each of your feet for length, using the metric, or mondopoint, sizing method.  (Knowing your American or European shoe size isn’t the help you think it ought to be.) Knowing your metric size is still our single best guide to proper shell selection. 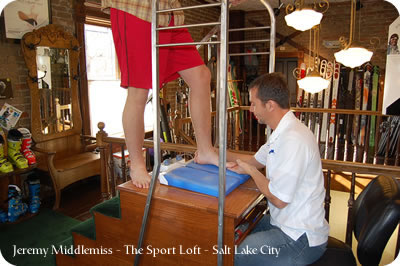 How to Help Your Bootfitter Help You

The best way you can help the boot fit process is to come prepared.