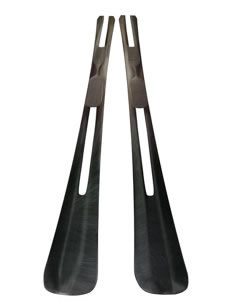 No question about it, alpine skis are pricey.  Middle-of-the-line models run for over $500, top-shelf all-mountain skis routinely check out for around $700 or more, unmounted, and some exotics seem to reach second mortgage territory.

One has every right to wonder, what am I paying for?

Let’s begin the cost analysis with a look at all the stuff that goes into or onto a ski. Every part in a modern high-end ski—and there are lots of pieces—has most likely not been made by the ski manufacturer but has been acquired from a subcontractor or supplier.  There are a limited number of sources for quality ski edges and sintered polyethylene base material, just to name two essential components, and neither resource is available on the cheap.

The most expensive components in most skis are metal laminates made from aluminum-titanium alloy, or titanal.  To keep both cost and weight under control, manufacturers have become quite clever at thinning, perforating or trimming this costly additive, but even leaving the metal out won’t change the skis’ price by much more than $100 at retail. And titanal has some very desirable qualities worth paying extra for, such as better contact on hard snow at speed.

Also in the mix is fiberglass in any number of possible incarnations and constructions, often reinforced with carbon fiber for added strength, resilience and damping. To ensure a more consistent result, reputable manufacturers control the pattern of their fiberglass weave, which raises their costs but delivers a much more dependable product.

Then there are all the pieces and possibilities associated with trying to deliver a quiet ride over hard terrain at high speed.  Viscoelastic dampening materials may be laid over the edge (inside the ski), sandwiched into the construction or attached to the topskin, a lot of which have to be integrated into the ski by hand. Damping technologies such as piezoelectric fibers may be hand-me-downs from the aerospace industry, but unfortunately NASA suppliers don’t offer a bargain bin.

While assembling all of a ski’s parts in a mold is a hands-on process, it takes a battery of high-tech machinery to complete the transformation from pile of parts to completed ski.  Just one base-finishing machine can run to six figures, and it takes a large roomful of said machines to finish a ski cleanly.

Sometimes a model’s price is a direct reflection of the brand’s investment in finishing each ski.  The relatively high retail prices of Kästle and Stöckli, for example, are primarily due to these brands’ insistence on an impeccable finish that exceeds industry norms.

Any manufacturer desires to eke out an inflated margin here and there are kept in check by a viciously competitive, shrinking market that requires distributors and subsidiaries to offer outlandish discounts even on new, flagship models just to avoid losing precious rack space and with it, market share.  The “synergies” of merging formerly competing brands under one roof have led to an implosion in the ranks of middle management. The one segment of the market pipeline we can be sure isn’t profiteering is the domestic wholesalers, who have cut staff and non-essential expense to the subsistence level.

“Aha!” I hear the Alert Reader cry.  “The reason skis are so dear is because the wily retail merchant scalps us with his gold-plated margins.”  If you believe that notion, you are not observing the natural world, where specialty retailers disappear after every season, never to reappear.  This isn’t the behavior of a robust market.

From the retailers’ standpoint, every ski season unfurls as follows.  The season begins at Labor Day, when everyone expects 60% off retail to be the norm.  In October nobody shows up unless you run another sale with discounts that would bankrupt the Koch brothers.  Finally the ski season shows up (maybe) at Thanksgiving, only to have every other customer ask him to match price with a warehouse that operates a really nifty web site.  This match-price-or-else attitude prevails until demo season begins, at which time every skier in America asks if they can buy the demo.